Make the most of our central location!

Situated in the heart of London, the Judd Hotel provides the ideal location from which to enjoy the vast array of historic and cultural sights on offer.

Many of London’s most famous attractions are within walking distance; notably The British Museum, The British Library, Regent’s Park, and Camden Market – the largest street market in the UK.

King’s Cross St. Pancras Underground Station is just a 7 minutes’ walk from the hotel and is served by more underground connections than any other station. Just a few stops on the Underground will bring you to the West End, the lively streets of Soho and Covent Garden with their restaurants, bars, and theatres, and the world famous shopping areas of Oxford and Regent Streets.

In fact our convenient, central location means that most sites in London are easily reached.

If you wish to explore outside London, St. Pancras is a key terminus for Eurostar (with direct trains to Brussels and Paris) and high-speed rail in the UK. If you visit Kings Cross station don’t forget to look out for Platform 9 ¾ where the schoolboy wizard Harry Potter boarded the train for Hogwarts!

Looking for tours and trips to do during your stay? Click to book many great sightseeing tours like the Hop on Hop off bus through our recommended tour company Golden Tours. 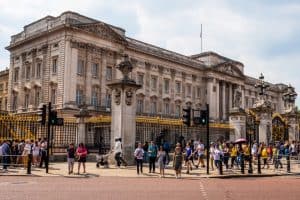 Buckingham Palace
Besides being the official London residence of The Queen, Buckingham Palace is also the busy administrative headquarters of the monarchy and has probably the most famous and easily recognisable façade of any building in the world. Visitors are allowed access by an organised tour to some areas of the Palace.
The famous Changing of the Guard ceremony takes place in the forecourt of Buckingham Palace at 11.30 every day in summer, every other day in winter, and lasts about 45 minutes. 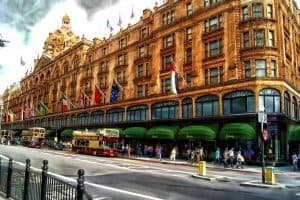 Harrods
Much more than just a shop, Harrods is one of the most famous stores in the world, although it may also be the most expensive! The interior décor is stunning, particularly the famous Egyptian escalator. The food halls are magnificent. Please note that backpacks are not allowed in the store. (Knightsbridge Tube). 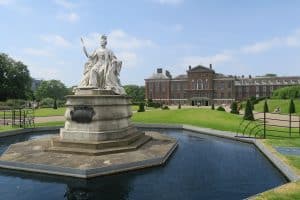 Kensington Palace & Gardens
The Palace is the birthplace of Queen Victoria, the London home of Princess Margaret and the last residence of Princess Diana. Tours are available through some of the rooms and tea and treats can be purchased in the Orangery. The palace is attached to the beautiful Kensington Gardens which join Hyde Park. (Queensway or High Street Kensington Tube).

Tower of London
Originally built by William the Conqueror this ancient fortress has stood guard over London for more than 900 years. Its many famous prisoners have included Mary Queen of Scots, Elizabeth I, Sir Walter Raleigh, Anne Boleyn and Rudolph Hoess, many of whom ended their stay there by being beheaded. It is the Crown Jewels’ and the famous ravens’ home. (Tower Hill Tube) 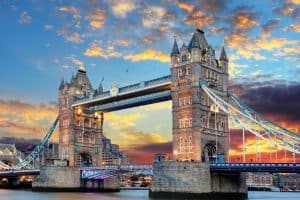 Tower Bridge
Just a little over 100 years old and one of London’s most famous landmarks the bridge crosses the Thames next to the Tower of London. The bridge can be raised for the passage of river traffic. The tower Bridge Experience takes you inside the bridge to see the engine room and up onto the walkways for a fabulous view over London. (Tower Hill Tube)